Today trip was short notice and we need to find the right spot because we are hosting a  local tv show called ” Petualang” its hosted by our friend Al. I was unfortunately sick with flu but i didn’t give up, i called  Mr Ketut his famous painful massage. He massage the nerve that connect to my sinus,  fever, and flu. After 10 min of painful massage i was better. My nose was clear, and my fever was gone. I was left with annoying cough but good enough to dive.

We decided to choose south bali because we  few location as an options. Also is mackerel season, and  the best spot to find spanish  mackerel is south bali. The first spot was murky, 5 meter visibilty. The only fish i saw was 5 kg scribbled snapper who sprint as soon he saw creeping to his hole. There was a lot of rabbitfish but i was hoping bigger fish come after, so i never dare take any shot. Ennk also use the same strategy, he know the pontential of big predator fish can come unexpected. Antok took different approach and shoot everything he sees or he thought he saw. So he shoot a rabbitfish and unicorn mistaken for GT due to poor visibilty.

Second spot the current was so strong, again all the predator fish no where to be seen. The famous emperor snapper spot was deserted and no one was home. Not a single scribbled snapper or trevally. Visibilty was the same 5 meter or worst certain areas.

Last spot the famous mackerel spot visibilty was amazing 20 meter plus. I had a great feeling, but my energy stock was getting low. This time i paired up with antok. Because if he shoot a fish there possibilties  other targeted fish will come close . I was right anotk shot a baracuda, first dive i shot a queenfish but it got off from the spear. Second dive i shot  trevally. Antok said when he shot the baracuda he saw a mackerel few meter away. He quickly retrieve the baracuda and we both keep an eye on the mackerel. Not long after that the visibilty change dratsically and all the fish dissapear. 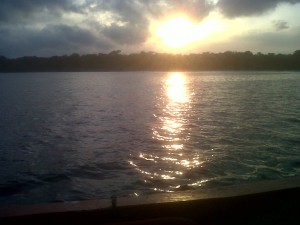