Some people on our humble little island got together to slaughter some goats and start one of the biggest Muslim holidays of the year. We decided to book a boat and see what there is to catch around Bali and some of the outer islands.

Our trip started at 8 am in Tanjung Benoa and we headed to Nusa Penida first. The first stop made was a couple of bays down from christal bay. The visibility was generally ok but that didn’t help the fact that there were no big fish around. After about 1.5 hours of swimming the bay up and down all we have seen was a group of big Emperor fish and few bigger groupers that where hiding deep in the caves of the bay. Other than that there were just the standard schools of unicorn fish and a lot of small reef fish. Nobody knows where but of course Eenk was able to catch something decent which was a medium sized barracuda. Approx 4-5 kg.

Next stop was also a little bay up the wall of Nusa Penida in the channel between Penida and Cunningan. The spot was a bit similar to the previous bay and we didn’t see any big  or even smaller good eating fish. After a not to long stay we left and went to have a quick bite in the more quiet waters around Lembongan. It was quickly decided that we would try our luck in Nusa Dua as we wanted to catch the good time for the bigger fish between Tanjung Benoa and Nusa Dua.

Once back on the coast of Bali the visibility was a bit murky at the top but once diving under the layer of warm water the visibility on the bottom was fairly decent. It was an amazing spot and we all saw a different kind of nice and good eating fish. There where schools of medium sized dog tooth tunas, loads of different trevallys, mackerels and of course lots of medium sizes reef sharks.

It was once more a pleasure to see Eenk becoming one with the ocean and watch him diving 30m down and resting for minutes on the bottom waiting for the right catch. As you can see from the picture this tactic was a success and he shot what he calls a decent sized barracuda. Approx 22-24 kg. Apparently nothing compared to the 38 kg fish he shot in his home town in Java a few years ago but seeing him holding that fish (which btw is taller than him) with 4 cm long teeth lets you only imagine the fight this beast gave him before he could reel him in. This was obviously the catch of the day!
Other than that I shot a few trevallys, Pablo once again went for the beauty price as we can see from the fish on the left side and Rob added his sandal so he would also be represented on the catch of the day picture. 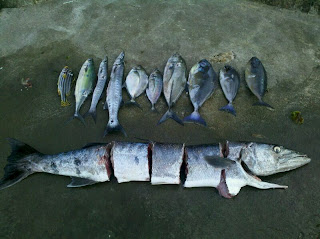 My last shot of the day was a fairly decent sized trevally that I had to share with some more or less uninvited friends. After seeing many small sharks all day I was aware that this could happen any time but I was shocked by the extend of the attack on my catch. Apparently I shot the fish just e few meters next to what seemed like a very well frequented shark cave. After reeling the fish in and almost holding the spear with my hands I realized that there where about 10-15 sharks following the shot trevaly and where asking for their cut of the catch. I figured it would be best to leave these boys what they came for as there were by far too many to battle. Even though we all regularly see some reef sharks while shooting it was a very frightening experience to be surrounded by a mass of fully grown grey reef sharks. It made me feel a little bit better when Eenk told me that he hasn’t seen so many sharks in a cave before.

Other than that we had a great day out on the ocean and once we were all back on board we where waved good bye by a school of dolphins.
As we were all dead from too much sun and no one had the energy to start the bbq that night we did it the next day. As an appetizer we cut the bigger trevally into sashimi and made a Balinese style grill with the rest of the fish.
All in all a perfect weekend amongst friends and family out on the ocean and back at the BBQ.
Keep our oceans clean and hunt with respect for mother nature!
Previous Article