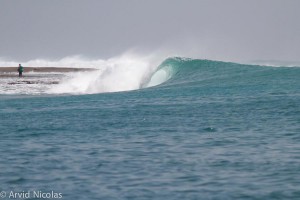 The title of this blog say it all. The jungle in the national park is hardly penetrable, is dark and mysterious. Inside the pristine forest , are left hidden from the human the shy endangered Javanese rhino, the allusive leopard, the famous javan Banteng and many other wildlife. It took us 5 hour to reach the boat from Jakarta, another 4-5 hour boat ride until we found a spot to sleep. First day only caught barracuda for lunch  while trolling . The wind was quiet strong during the afternoon and the bay was quiet murky with 1-2 meter visibility. Not many interesting fish on the first day. Trevally was under size and no grouper or snapper. Unfortunately, we only have small Rabbitfish for dinner and chicken from the supermarket..

Second day we move to another spot. The visibility is better 4-6 meter but still nothing worth of pulling the trigger. After lunch we move to new location. The current was stronger and looks more promising.  First dive i saw nothing until i was in the area with the strongest current shot a 4kg blue trevally. Then 1.5 kg snapper and saw 2 mangrove jack but i was hesitate to pull the trigger due to rock formation behind it. Try to find it again but it was kept it distant, then  bluefin trevally came with school of 6 and waited for the biggest one to shot.

The last day of the trip i woke early in the morning and i hear people screaming over excitment of catching 500 gram to 1 kg squid. Saw i geared up and head staright to the water. i was to late but there was a school of milkfish. I shot atleast 3 milkfish and the manage to fight and rip the body off the spear. it was a nice decent 1-2 kg size.. The last fish i saw was the african pompano which i miss point blank. I guess i was over excited about having sashimi. after all the dissapoitment i was lucky enough to manage to secure one decent size mullet.

after lunch we went back to the same spot from yesterday and hoping to catch some mangrove jack and more trevally. Not sure what second spot my nose was bothering me so much that i only lasted 1 hour. I manage to catch octopus and a snapper. It wasnt as good as the day before.

Arvid stayed longer and start shooting every species of snapper in the area. He shot Scribbled snapper, Mangrove jack, Red snapper and grouper.