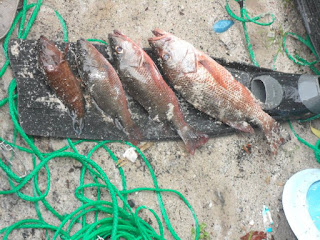 There are several location where you can find mangrove jacks. The juvenile Jacks are usually found in and around mangroves, estuaries and some freshwater streams whilst the adults generally live in offshore reefs down to 100 m.

The Biggest mangrove jack i speared was in Belitung. It was in a school of 5-8. all of them was over 7kg. First dive i stayed in border between sand and the coral reef it was 14 meter deep. The school came from a distance and started to head straight to my direction. As soon as the mangrove jack changed direction to the right i aimed and shoot.
In Bali and Baluran is different, They size was between 1-3 kg range and they don’t come in a school, mostly solitary. Best approach is to ambush them like in other fish but the majority of the time when you encounter mangrove jack they are very curious and will approach you in close distance.

Most Expensive lobsters and fishies