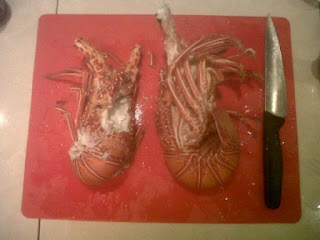 Well that’s what we call statistics.. It all started with a drive down to the Bukit not too much traffic some good nasi bunkus on the way and an absent peter because of “higher influences”.
Finally made our way down to the spot and once we swam beyond the reef we found out there was almost no visibility. And when I say no visibility I mean less than 3m sight with super murky green/yellow ish colored water.
After swimming up and down the reef for what felt like an eternity Arvid managed to locate a cave full of Lobsters where he managed to shoot three decent sized ones.
As there was almost no visibility all we could do was just hide somewhere between the rocks and hope that some fish would cross our paths which towards the end luckily happened and made us at least catch a good dinner.
Walking back up the cliff and being all excited about getting back and cooking up what we just shot we had to make a super annoying discovery.. Some mother….er managed to open the car and steal everything we left behind! Being in Bali and believing that this island is one of the most spiritual places on earth we can just hope karma will get to whoever did this! And if karma decides to not get back to him then at least prostate cancer or something similar to that!
After a super frustrating drive back from the Bukit through the thriving traffic of Bali we finally made it back home to prepare some lovely lobster pasta accompanied by a good bottle of Scotch.
And the moral of the story: As long as you have a good bottle of scotch and loads of lobster even the most frustrating day can turn into satisfaction.
Previous Article

Most Expensive lobsters and fishies

When You Keep Your Catch, Use Every Part of It!