Trip to an unknown destination.

May 27, 2016 / balispearo / No Comments
Few months ago i’ve got a called by my friends wife, she asked if it would be a good present for his birthday  to send him over to Indonesia for some spearfishing with me, i didn’t think much about and quickly answerd with a simple YES! We organised him a motorbike from “Bali Bike Rental” a Kawasaki KLX 150. Which arrived fine within our doorsteps deliverd by the serivce. We picked up our mate from the Airport at around 23:55, we got home, and we had a quick chat and debate when we should start driving, well I had the brilliant idea and said NOW !! which was at 2am at night. 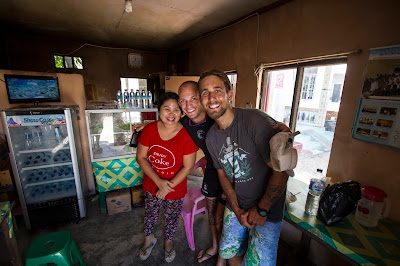 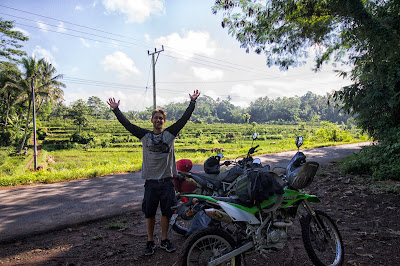 We grabbed the ferry from Padang Bai at 3am, over to Lombok with our bikes loaded up totally with all our spearfishing gear. We Arrived on lombok at 10 AM in the morning, and started driving as fast as possible to cross over to Sumbawa. As we arrived to Sumbawa, i will skip the story and continue onwards with the arrival on the island, lets just say it took another 10hours to get there by bike + boat. (top secrets :D) 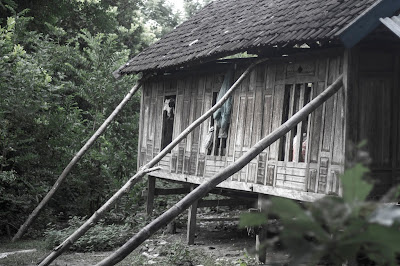 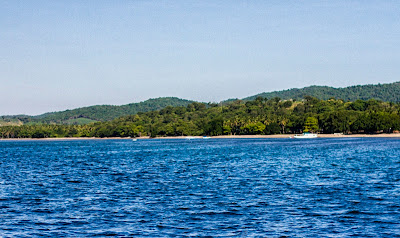 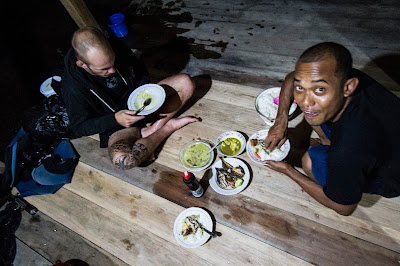 We arrived on the island after a 3h boatride , we shared a local boat with few Island locals that where really heartwarming welcoming us. As on arrival at around 5pm on the evening we decided to still gear up and head into the water to atleast get wet. As the sun started going down we have been losing daylight and decided to swim back to shore and prepare our beds. Our host family prepared us some food for the evening, it was all very fresh locally grown products cooked with so much love that we could’t get enough, it was fish soup that night… SOOO DELICIOUS!!! And thats hard to describe as both Blake and Myself are chefs with experience from Michelin star kitchens. The goodness of flavours was a explosion!!!!!!

As the evening was passing we had to organise our boat, our local guide helped us and found a boatman and we had a meeting with him on the same evening, We had a chat and decided a price, so we packed our gear for the next morning and off we went to bed. As early as possible we woke up which was 5am, had some tea and a light breakfast, we had to carry our gear to the boat which was around 15minute walk from our homestay.

On the boat we had a crew of 2 deckhands, captian and guide that where helping us out with our gear, and plenty of deck space. We decided to head to the east of the Island as we had our Navionics App and checked out the ground on it. 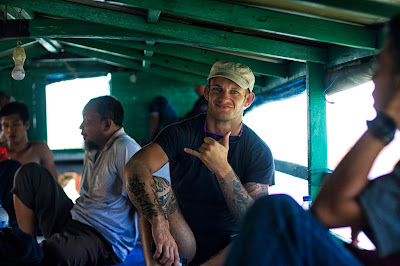 And honestly everything looked good on it, as we arrived on the spot we jumped in and where fascinated by the crystal clear waters, even as we have been yesterday on our way to the Island , the vis around the island is like 30m + all the time… which is mind-blowing. We started diving to around 15m , and headed to some deeper drop offs 20-30m. But not knowing the currents and Island itself we mostly swam around just enjoing the freediving.

As we got onto on corner with some current suddenly the bait fishes rocked up underneath me, I dove down and spotted a school of bigeye trevalleys that was interested in me, but i didn’t pull the trigger as i waited for something bigger (as usually haha). The drift ended soon and we decided to keep on going with the current to actually see as much ground as possible. After around 2h of drifing we decided to head to another Sea mount that was just around the corner , it was showing on the Navionics App that it comes up from 45m to 10/5m on the highest part, It was incoming hightide and you could drift above it. 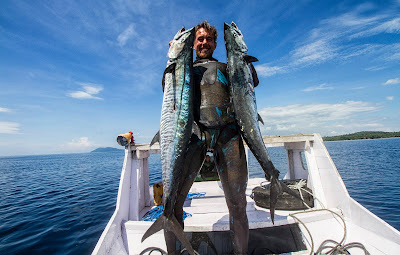 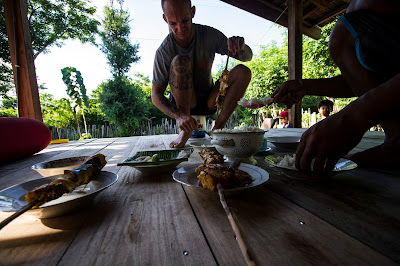 We spotted a good corner with baitfish and decided to drop down there, on my first dive i’ve seen a bullshark and big … really big rainbow runners, which all in all got me really excited and i continued drifting, on the last dive on that spot i’ve seen a spanish mackrel rocking up behind me so i used the techinques that Brett Levingston told me is his secrets in catching spanish mackrels and took a perfect body shot, that fish went crazy!!!!! It pulled the first float almost down, and just went ballistic in a circle. Which got the boat crew pumping and our guide that was watching from the boat. As fighting the fish we kept on drifting and the boat picked us up , everyoen was super exicited by the sight of a fish on the boat!! We started to get pumping!!!! 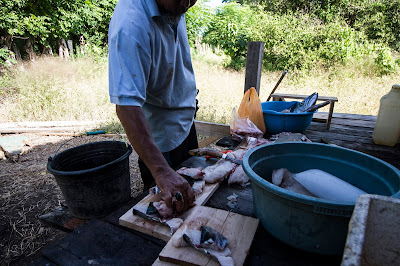 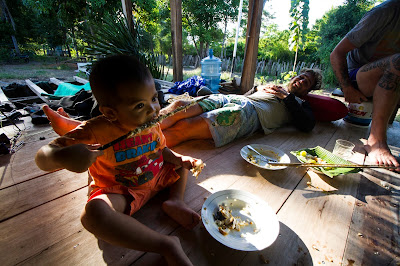 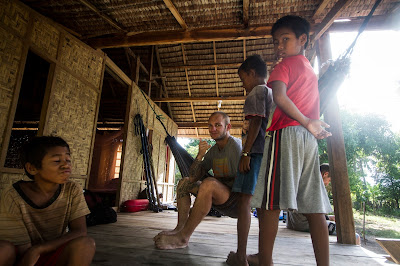 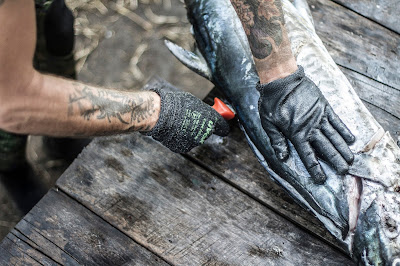 Quick break and off we went again to repeat the same drift, Im jumping in and Blake is following up, it was his turn to dive down, he went down on the same spot where we spotted the Rainbow runners, he dropped to about 22m and behind him was a HUUUGGEEEEE spanish , swimming around 3m away from him, but watching from the top, you cant yell at the diver below, it looked like he was focused on a diffrent fish down there since the spot looked really alive. On his way up he saw the mackrel in the distance and pointed at it. To notify me that its there. 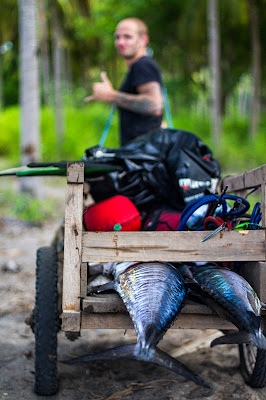 We now knew that there is a dinosaur mackrel guarding its spot. Quickly we jumped back on the boat to repeat the drift. We dropped of further to have a better breath up and preperation for the drift, i decided to go to around 28m and check that Dinosaur out, as i started my decend down i spot the baitfish , i keep on dropping not looking into the left side but having a feeling that somehting is there, i have a quick look and i spot the beast, 20k of Spanish Mackrel swinning right infront of me, i do a quick turn and point my Rob Allen 140 at its body and off goes the shaft, perfect body-spine shot, the fish still gave a good fight, it pulled for around 5minutes before i could even think of lifting it up, in that time we already drifted over the reef. The boatcrew was following us and cheering, everyone was excited since this time the float went down for a short moment, as they pull up the fish we all see how big it acutally is. The whole team was stoked, and we knew that was it for the day and we want to head home, since we did lot of deep dives are we are really hungry and can’t wait for our host-mom to be cooking.

We get onto shore and a group of kids is playing in the water,  their eyeballs dropped out by seeing the huge two spanish mackrels!!! Nobody waited long and helped us with our gear this time, we had a small pull car waiting for us, we packed up the fish into it and equipment and started pulling it back home, not an easy task after diving for around 7hours. 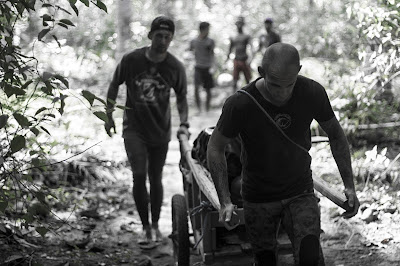 As we got home, we decided to quickly fillet the fish befor showering and other stuff so the hosts can share the whole fish with the village, it got split up into small bags so everyone gets something the family of the boatman and the crew and other fellow neighbours , it was amazing how a small community shares everyhing, we loved it, kids where coming to say thankyou and we got bombed with free coconuts!!! As the food was getting prepaired by the family the kids setup the fire. Everyone had a job, the teamwork was awesome! 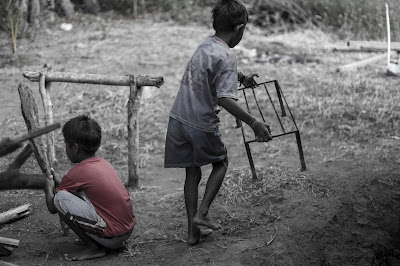 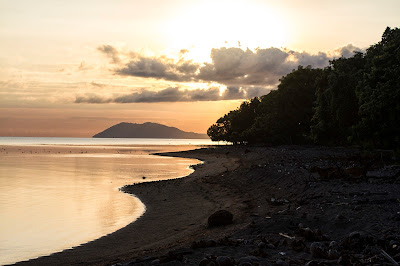 We ended up eating and our bellys where full , the sleep came easy , off to bed the gear was already prepared for the next early morning which was also our departure. The next day we woke up early and got all our bags ready , we packed them on the boat and started heading out, we planned it that our captain will drop us off back to sumbawa, so we will spearfish on our way back.

We decided to stop at a reef where we had to ask the village chieftain to spearfish on, we paid a fee off 100.000 rupiah (10$ usd) and enjoyed the 40m visibilt and 25m deep drop offs filled with so much life… Coronational Trout’s, Maori Seaperch and also groupers. That day we decided not to spear so much since we where not able to eat it or also give it away without the fish going bad from the travel times. So it was more of a discovery tour. 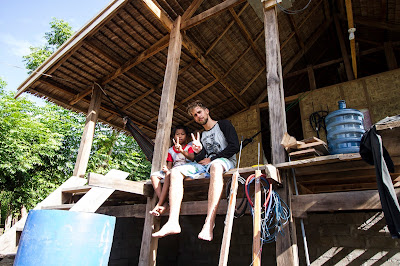 As we started getting exhausted we called it a day and decided to get prepared for the 3h hour steam home. As quickly as the journey began both of us have fallen asleep. The coolest fact about the location was that it had no reception or power during daytime. Only power at nighttime. Which gave it a special vibe. Our hosts where awesome and Im hoping to get back there soon to spear more fish.

Here is a video the video  :