May 23, 2016 / balispearo / No Comments
We started early in the morning and when we arrive at the first spot we were greeted by school of Sardines. Its always a good sign because most of the time spanish mackerel is included on the equation. After 2 drift we spotted 3 spanish mackerel in the distance. But the current changed and there is no more sign of them.  We move spot and i shot a small GT. 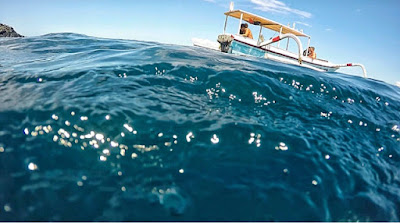 Then we move to the 3rd spot which is famous for big GT, Wahoo, and lots of spanish Mackerel. First drift Ryan Brisbane spotted a Big 30 kg GT who kept it’s distance. Then we spotted a school of Mahi Mahi jumping off the surface. We quickly jump in to do a drift dive, as soon as i was in the water a 10 kg wahoo headed straight to me, i quickly load the gun only manage to load one rubber and took a shot. Landed first wahoo of the day. Then 10 minutes after that John shot a Spanish Mackerel.

4th Spot was when the party started. There were bait fish every where, and thats where all the spanish Mackerel was concentrated. the first drift Ryan and John miss the shot. The remaining of the drift dive everyone started to land good size spnish mackerel. Spotted a wahoo but it was like a bullet, dodging everywhere we spotted it.

over all it was a good dive with great success hunting.

Trip to an unknown destination.