Spearfishing at the last refuge of the Java Tiger Day 1 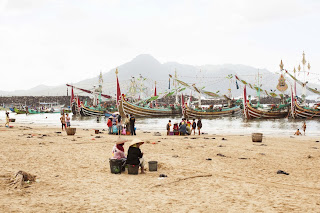 Our plan to visit The National Park goes way back to 4 years ago. We heard the park is protected by mountains; the tallest mountain is 1100 meter, and the notorious open sea Indian Ocean. The national park is located in the province of East Java, Indonesia, extending over an area of 580 km² of which a small part is marine (8.45 km²). The beaches of the park provide the nesting ground for 4 different species of endangered turtles, Leatherback, Hawksbill, Green and Olive Ridley. It is the only place known to have 4 different species nesting on the same beach.

The belief that the java tiger sporadically appears in the park is quite strong and this makes the place very exciting. There are numerous evidences since the 80s until present that the tigers are roaming around the forest. Fresh tiger claw on the tree, fur, feces, footprints and eye witness by the local villagers support the belief that they are still present in this area. WWF stopped setting up camera traps in 1994 as well as research or expedition. Hopefully many more evidences will surface and the WWF re-initiates the research again. The Minister of Forestry also enforced setting more camera traps since 2011. Hopefully we will see the phantom cat reappear to our world. We all gathered at Arvid’s house at10:45 pm. We started the packing and sorting all the equipment to make sure we have all that is needed. After completing our checklist and resting for a while, we started the journey at 2:30 AM. We boarded the ferry at 5:00 and reached Ketapang on the Island of java at 5:30. To find the direction to the Fishing village, we rely on Wolou’s IPhone and Robert Sony; he is our rookie in the trip and will be put on hard labor as the butler of the trip. In general getting information from Google Maps works but it is prudent to be cautious concerning unfamiliar places. We had to go through small narrow bridges, broken bridges, broken road, dirt road and many detours.   After small adventure in the Banyuwangi province we arrive at Fishing village at 8:00 A.M. The port was clean and the air free from the smell of a typical fisherman harbor. We contacted Mr. Subiyakto Firdauss, the head of the fishery department of Fishing village, who arranged a nice boat for us with 4 crew.

While I was busy negotiating with boat owner, the boys spent their time watching the Cobra medicine man. He was demonstrating how to prepare the potion with his secret ingredient mixed with fresh killed cobra blood. He demonstrated how to kill and retrieve the blood in less than a minute. Then he explained clearly the used of cobra blood potion. First it used to repelled snake, second to increase your immune system, third increase your stamina and lastly to replace Viagra. He demonstrated the Viagra use by breaking a long grass in a half, then he covered the broken area with potion and the broken grass became straight and strong. He explained that it will have the same effect with your manhood.

After finishing the negotiation about the transportation price and explaining our plan of the trip, we started loading our equipments on the boat. We had to use a small taxi boat to transfer our stuff from inland to the boat. Our captain and his crew were very friendly and excited to be our guide for the trip. He was showing photos and telling us stories about his fishing on the rough Indian Ocean. He explained the best place to go   fishing is at FAD  only requires 6 hours and is worth it because it is full of big pelagic fish, especially yellow fin tuna. But To us the this trip was not only for fishing but also for relaxing and enjoying nature. The boat ride to our camp site took us 2 hour. We set up a trolling gear but no luck. When we arrived to the spot we were surprised at seeing the number of fishermen camping overnight; we had 3 neighbors.

We were very excited to see the beauty of our camp site. It is located in a bay, with a small river running behind our camp, and a small waterfall only a few meters behind us, with a small fresh water pond from the spring up in the hill behind us. The view of the bay was amazing, and also the sight of the surrounding dense forest was really beautiful. As usual we are very spoil with our diet on our annual trips and Arvid quickly prepared an exquisite pesto pasta for our lunch. With a full stomach everyone took a nap; we haven’t slept since the day before. While Arvid prepared the lunch, the captain, his crew and a fisherman constructed an amazing camp, including a kitchen bench for Arvid to do the cooking. 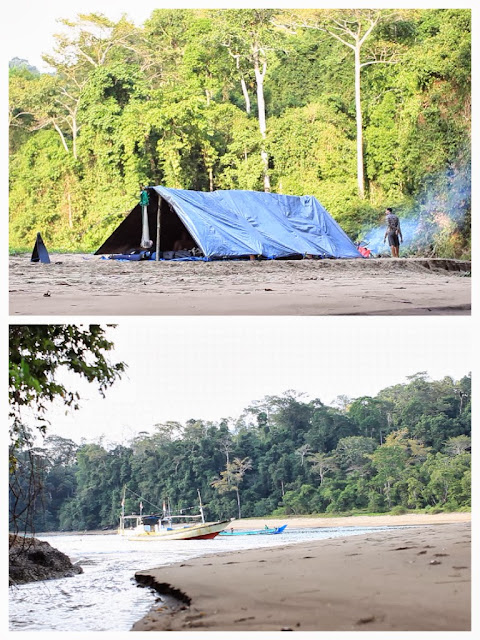 Arvid wanted to check the reef on the bay and so he did a little bit of free diving. I was surprised that he only did it for about one minute. He came back for his new Geronimo Cressi gun and rushed back to the water. After 30 minutes, he came back with a nice size blue fin trevally. So I decided to test Fabio’s new gun, which is the same gun as Arvid but with a reel. I swam for about 5 minutes and I was greeted by a nice snapper and I was impressed by the gun power and accuracy.

After a nice swimming we had to start preparing dinner, we were planning to grill chicken, rice and lots of sambal. The crew collected and piled wood fire. It usually takes 2 to 3 hours to grill and we started early. Half way the BBQ we had to speed up the cooking because the sky was forming heavy clouds that precede rain. The cloud passed after dinner and we only had a small drizzle. The sky quickly changed and the night welcome us with millions of bright stars. We can see the Milky Way and shooting stars. Rob spent the night taking picture with his time laps toy. I couldn’t open my eye anymore and ended up sleeping early.

All Picture are taken by Arvid Nicholas , Velere Terrier and  Robert Koster

Spearfishing at the last refuge of the Java Tiger Day 2