The boat was a nightmare, there was expose fiberglass all over the boat that need proper finishing. We all suffered from fiberglass rash and ridiculous itchiness during the whole boat ride. Second problem, its too windy and huge swells of course as usual Arvid already reminded me but way too stubborn as usual, and on top of that the boat that we uses are boat for flat water and it rocks like a cradle causing us motion sickness. For the first time in the years of our spearfishing, surfing boat trip etc, Arvid vomited in the water chumming school of fish with his regurgitated nasi bungkus. Jim Kiernan vomited at the first spot too, I was feeling sick moving from the first spot to the second spot. I couldn’t focus or have the energy to dive at the second spot, the others were fine but annoyed with the boat instability and underpowered.

The boat ride to the first spot took us 2 hours due to the wind and swell, on the way there the captain spotted a big shark, i soon to realize it was a fat shark judging from the stomach size and length it was a 3 meter Tiger Shark , the captain confirmed it with the spots on the shark. It kept all the guys quiet and i am sure little bit scared.
When we reached the first spot Cody B Young our spearo from Kauai was the last to enter the water and saw 3 huge Manta Rays,  The last time i saw a Manta Ray i swam with them for 2 minute until they took off The width was bigger then my outrigger, and when i went back up to the boat the manta ray flew out of the water for at least 1-1.5 meter off the water surface. I guess is manta ray way to say goodbye.

Despite the promising huge reef formations and caves at the first spot we didn’t see much, visibility was poor the swell is too strong we cannot stay still to get a good shot, everyone had difficulty spotting a fish and shooting one, So we move to a new spot.

On the way to the second spot we saw a school of Dolphin, hunting for small school of bait fish behind the reef. Well guess what, like the local superstition the Dolphin brought us luck at the second spot, at the second spot the visibility was the same but it got worst in less then a hour; I gave up and rested. After getting enough sun to warm up the body and fighting the motion sickness, i tried popping but no luck, not long after i saw female Dugong with its calve taking a breath and dive in, 10 minutes later they surface again pretty close to the boat. It has been 2.5 years since we last saw a Dugong. Around 4 years ago at same area, i  have the privilege to have swam with a family of dugong (Manatees) The calve was very friendly, it swam with me few time accompanied by both parent taking turn watching the baby.
Antok is very familiar with this spot and he went straight to all the best location. He spotted 3 scribbled snapper and shot a 4 kg one. Then he shot 2 parrot fish around 1.5 kg each. He also shot a trevally and it got away because the spear tip close.

Third spot was the highlight of the day. The water was clear, and teaming with fish, all 5 of us nonstop taking turn diving, I hear gun goes off nonstop it was a war zone.
We saw lots of different species of trevally, queenfish, grouper, big school of surgeon fish and many other reef fish. Me and arvid pair up taking turn dive down and informing what we saw below. Antok went furthest and saw big giant trevally, but he only manage to shoot  2 trevally. Eenk again become the star of the trip he shot a 4.5 kg green jobfish. Me and arvid was diving the same spot atleast 4 time and didnt see the jobfish. I guess it was eenk faith to have the honor to shot the trophy fish. Arvid shot 2 Queenfish. We were excited to go back to the boat to takes us to the drifting starting point again as at this time all the fish were out hunting against the current as it was almost five o’clock and the tide was going out, to our disappointment the captain have to give us the bad news during the best time of the day due to petrol situation, we only have just enough to go back.

The end of the day it all payoff all the hardship we went through, sighting of bad and good omen led to a good day of spearfishing at south of the island of the Gods. 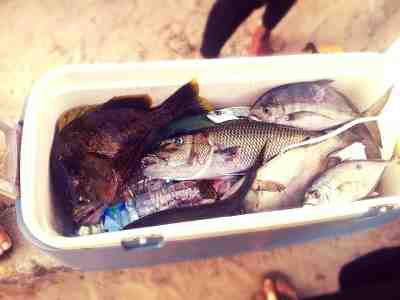 I think we all have Ciguatera in Bali