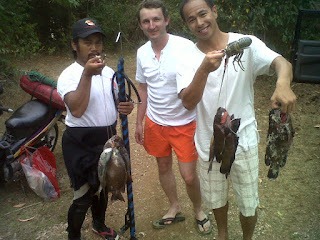 Start spearfishing around 2 pm , water is cold, cloudly, swell was below 1 meter, and water visibility 5-10 meter. First shot was a rabbit fish, one of my favorite fish for the deep fried. Then found a rock full of lobster and got lazy a shot 1 kg lobster but the speartip didnt open so the lobster escape. after that  I miss a every shots. saw a small green turtle, beautiful, swim with for few minute. Arvid was doing very well shots few good size peacock rockcod. the biggest he shot was 1 kg coral cod. Then i finally shot a peacock rockcod it was hiding under a big rock. to get the grouper i have to go inside a small hole and only my fins was sticking out of the hole. very scary because i have no room to move around. luckly the grouper was dead because it was killed shot through the head. Overall it was nice and relaxing spearfishing. Pak sate only went in for 2 hour and he got few nice fish, snapper, trevally and rabbit fish.