we left early morning with the boat transfer to our destination, checked in into our hotel and prepared our gear for the next day spearfishing since we had a late arrival.
As we rigged everything up we had a chat about hunting in diffrent continents on the world and shared stories.
Shortly after that we had a safety briefing and discussed our plan for the next two days and what type of fish we are going to be targeting around the spots that we will be going to. 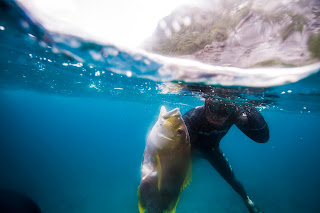 Next morning we woke up early and waited for the boat at 6am to pick us up , we jump in
gear up and get ready for a one hours steam to our location.
We target the depth of 10- 25m to warm up on that day and diffrent pelagic and reef species that we encounter on the first dives.
spend on the spot around 2hours and we moved along the coast to the next one, as soon as we jump in we spot a Giant Trevally in the deep, and we get excited.
Hunting the ground and observing the other fishes recations to spot the predators that could be lurking around. 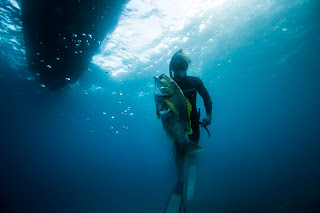 As I dove down, i spotted a  Maori Seaperch gliding away from me , luckly the water was murky in the first few meters and he didnt see me coming, i took the shot from the top , around 3m away and landed it in the stomach , that was the first seaperch that i ever dive bombed.
Greg landed few nice sized Golden and Bluefin Trevallys with his polespear.
We decided to call it a day after hunting for around 5 1/2hours and went back.
Day 2.
We went to our favourite spot to see some big fish as the weather was perfect for it,
as we arrive the conditions where not as expected but we still went for the dive and saw many GT’s , Maori Seaperch , Jobfish and few dogtooth tunas passing by, but everything seemed so hectic and the Seaperches where sitting deep.
As we hunted the spot for few hours the captain asked if we can shot a Big GT for his families ceremony so he can supply them with fish and food for the next 2 days and shortly a 40kg GT appeared out of the abyss , quick duck dive and it came up to me , i had a Rob Allen 130 and a Break-away system. As we all know GTs do the famous turn, the shaft went streight into his head but missed the stone shot by few cm, the fist did not put not much up for a fight with a 8.5mm shaft in its head and i quickly pulled it up to kill it and dont make it suffer to much.
Ended up with a PB GT of 40kg.
On the way back we spotted few mantas and decided to take some pictures of them while thier feeding in the area to have it as nice memories
Previous Article

Day trip with Joe and Tyson