Unforgettable Trip to an known but yet untouched location.

February 22, 2016 / balispearo / No Comments
Well it all begane pretty unplaned, my best mate and me have been sitting at home one night after a hard day at work and decided that we should do a Holiday in Indonesia and do some spearfishing in crystal clear blue water of the Archiplego and go on some crazy adventures, as impulsive as we are we booked our tickets to Indonesia, 3 weeks full on spearing (that was the plan).

We airrved in Kuta, spend a night there since its one of the most touristy spots in Bali we tried to get out of it as fast as possible.

On arrival day we already organised tickets to Gili Trawangan to start with some freediving practice around the gilis. We got a good deal at “The Secret Garden Hotel”
It is not on the beach front but just a 2minute walk from inside the Village, we got a twin bed room for 250k each per night including Aircon and TV and a good DVD collection.
Despite the fact that the Spearfishing around the Gilis is not as good as it used to be due to the overflow of “Scuba-Dive-schools” and the noisy regulators on the reefs the fish are pretty much sitting in deep water, around 40-50m.
If your capable of diving to those depths, you will enjoy spearfishing around the Gilis. Back then we did not have the skills to those dephts.

The good positive thing about the Gilis was that there is enough turtels around to snap pictures of, and get your freediving skills back up befor the proper spearfishing in Lombok.

We booked our tickets from Gili T to Sengiggi and took a car ride to Kuta Lombok.

The whole trip with our spearfishing gear was a mission, it didnt fit into the bus since we shared it with few other tourists that where on their way too. After everyone squeezed in with the speargun bags between our heads we rolled out.
Arriving in Kuta, we stayed outside the village at a “Friend of a Friends” place, the price was good the room was including motorbikes so we could move around, we didnt pay straight away, we said we pay when we will want to leave so we can spontanously decide if we wanna hit another location.
We took our bikes and teamed up with some Local lombok spearfisherman to go to “Unteng Unteng”
at Selongblanak Beach which is around 30minutes ride to the west from Lombok Kuta.
The ride was in a local Jukung,
around 45minutes from the beach there is a sea-mount rising from around 45m to 5m underwater. and you can see the currents passing by.
As we where sitting on the boat we could see GT’s smashing the bait, which got us really excited!!

We landed few good fish, good sized golden trevallys our camers went out of battery after a whole day hunting, so we didnt manage to snap any shots of the fish out of water… always prepare a spare battery for a trip.

After the spearfishing we made our way back home in our wetsuites because it was raining.
now that we made this decision saved the whole trip for me!!!
On the way back we had to cross a mountain with around a 15% way down,
on the way down my back tire of the scooter lost controll on some wet gravel and i slided around 100 meters on the floor and the scooter into the side of the road, luckly there was enough trees that did HOLD me and the motorbike off the cliff side!!

Blake was behind me and saw everyhing happening, the spearguns got damaged on the side of the motorbike. THE WETSUIT saved all my skin and i had no wounds, whatsoever. The bike got damaged badly.
Blake thought i fell down the cliffs because he couldn’t see me in the bush stuck on the trees, and he panicked and yelled my name. I guess he was pretty shocked, few other backpackers stopped and started looking for me, since i had a camoflage wetsuit on it was hard to see me in the trees and it took me few seconds to realise what happend. I stood up and yelled that im OK!! I walked up and shook it off and the first thing i said was : “I hope my spearguns are ok” … Blake wanted to smash my face for that one… since the fall looked pretty deadly.
We headed back to a local motorbike garage to fix it up for 50k which took around one hour.

After that fall Im sure im not gonna drive down wet hills anymore with a rented scooter. So let this be a warning.
We fell to bed and planned the next day, it was time to go to Gerupuk!!

Gerupuk is a small village east of Kuta Lombok, pretty known surfspot but it has some good spearfishing outside the bay, we spend just few hours there due to bad weather conditions and only managed to land some parrot fish to not stay hungry that night. 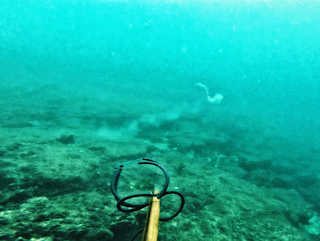 After Gerupuk we got told to contact a GUY called INDRA PASTRA
A LOCAL SUMBAWA legend,
and we asked our guy at the homestay to book a car to Sekongkang.
It was pretty weird since he said his cousing is going to drive us, to Sekongkang but yea,
we jump into the car and get to Labuhan… and he just dropped us off there with our bags, in the rain…… at this side of lombok nobody speaks english. Yup we’r stuck in the middle of no-where.

So we managed to explain with our hands and feet how to get to SKK.
Some dude said that we need to take the bus over there, we turned our heads around and looked at a fully stuffed bus, the roof was basically as high as the bus itself.
After a small debate we decided to say yes and paid around 300k each to get on that bus.
Which was ment to go to SKK.

After 4h ride on that bus including a Island hop from Lombok to Sumbawa.
They dropped us of in Taliwang… at around 6pm at night. The bus’s last stop. hahahahah!!! Yea right, rice fields and nothing else around.
So we look around and everyone tried to take us on their bikes to SKK for 400k each on a motorbike, with all our spearfishing gear. Apprently its close, we did not take the risk.
We spotted two guys sitting in a small pickup truck that would fit our gear perfectly.
We went over and spoke to them with our body languauge we managed to get a ride to SKK for 500k each (total rip-off) but yea thats the way
. 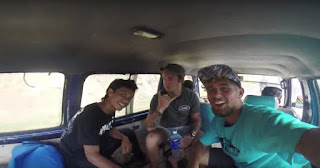 The car had few holes and we had to stop to cool it down around 5 times.
We finally made it to SKK and stayed at YoYos beach resort. 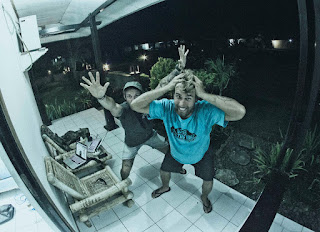 At the bungalow, after the total  stressed day and emptied out pockets from being bargaind :D.

Well we arrived , it was time to meet Indra,
we asked him to go spearfishing for the next day, he said cool well go, shore dive off the beach towards the GT house.
Indra landed a BEAST Maori Seaperch !! 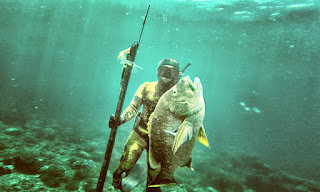 That was an around 45minute swim with the floats in the back and the current in the wrong direction, but it was worth a go. We havent been successfull at that point , the current was abit ripping and we where tired out from the trip. So we decided to call it after 4h of spearing and made our swim back in the waves.

Took a rest for the rest of the day and slept well.

The day after we decided to go chase some doggies from the boat,
We got on the boat and started spearing at the spot, after around 50 dives i’ve spotted a big doggie at 15m depth, but i was way to far away with my 145 gun back then. and the fish was approx 50kg+ i fired the gun and the slip tip did not engage. I was pretty upset.
I reloded my gun and went down for another dive.

I spot to dark shades coming up to me from around 25m so i stayed calm and waited for them to come up, and i see two BIG GT’s coming up, the front one was really dark so i decide to take the shot at it as it turns sideways and i land a good upper spine shot, the fish goes for a small run!! 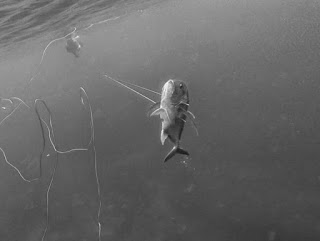 I yelled to blake to dive down and land a second shot to save the catch incase it would go nuts again!! 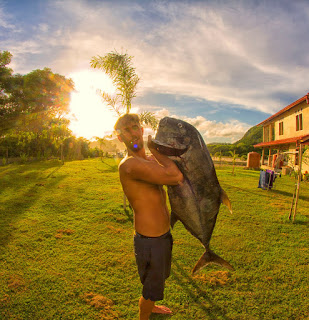 It was a fish of a lifetime, around 33KG in pure fighting mode, beast of a fish!!
That was one of our last days in SKK. and we enjoyed every moment of it.
We had beach barbeques with our caught fish down the beach, talked to passing by surfers that just joined the fire and we had music going too, a special night in the night skies of SKK and a enjoyable meal caught by few spearos.

That was an amazing trip, the logistics where hard but we did manage everything and made new friends.

All in all a very successfull trip where most things turned out well and fun.
One of the wildest and cooles experiences i had!!
https://www.youtube.com/watch?v=UlKNZH7SDN8
Trip was done in 2013.
Previous Article