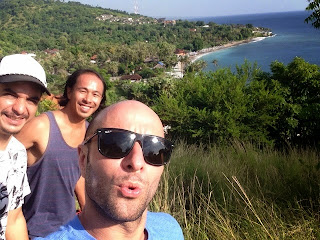 After delaying the trip several month, we finally get together and went on our yearly spearfishing trip.  When we arrive we were greeted by our most intelligent friend from Swisszertland, It was his Birthday and we did small lunch birthday at the boat captain House.

After that we didn’t waste anymore time and head to the ocean. unfortunately the swell was unfavourable, but for the love of the mother ocean and seafood, f@ck it!

First spot murky, but school of giant Milkfish was 1 meter away from our spear, but due to the excitement and knowing that you will get a second  and better chance for the biggest one was not a smart choice.

The next day after fine dining and fill up our stomach with delicious meal from Warung Nyoman. We head back to the ocean. The water was crystal clear, visibility was excellent. The swell calm down and wind also die out. We felt like diving at the lake. We all start shooting fish nonstop. Coronation trout, bluefin trivially, Unicorn fish for the captain family and bother.

There is nothing on this earth more to be prized than true friendship. @valereterrier @arvidnicolas #ThomasAquinas #quotes #spearfishing #fishing #hunting #gopro #goprohero4 #apnea #freedive #fish #indospearfishing #balispearfishing #Gianttrevally #GT #indolife
A photo posted by Indonesia Spearfishing Charter (@indospearfishing) on May 16, 2015 at 9:40pm PDT

Around 3 pm Arvid (+Arvid Nicolas ) swim toward us with face like he saw 20 ft Great white shark. he start screaming  at all of us why we left him all alone. Again guys this might be a good tip shooting big fish or diving alone. Arvid was hiding inside a cave hunting for snapper. 15-20 kg size Maori Seaperch decided to kick arvid out from his cave. Arvid took head shot but the fish swam like a jet and start going crazy all over the reef getting tangle. Arvid was trying to untangled the line forgetting he was under the water for 2 minutes, then he realise he running out of breath and while he was untangling the line , the line is wrapping all around his leg. in the same time the fish was pulling his leg got caught. luckily he unwrap the line, swimming to surface nearly passing out.  constantly in his mind he reminding himself not to pass out and don’t give up. He got to the surface and rested several minute while watching the maoriseaperch fighting and going insane like a bull on steroids!! in the same time he was screaming at us for help to secure a second shot. Unluckly none of us was around and the shaft got off and fish swam away.

Always dive with a budy!!!! poor fish, also not cool if you lose a budy!

After Arvid finish his nearly death experience story we all went back to the water and stick together. 2 year ago the same thing happen to myself. So now we both have the experience and know how it feel to run out of breath!

30 min after diving together Valere Terrier Shot his Personal Best GT, 15 KG!! We celebrate while heading to the next spot. Then we witness many more Giant fish but due to exhaustion and heavy strong current we manage to shoot few Bluefin Trevally.