Spearfishing at the last refuge of the Java Tiger Day 3 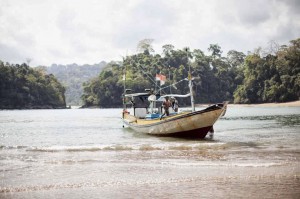 We decided to explore a different bay; one of the spot is called “Shark Island” in Javanese. We all wereexcited about this new place and hoped to see some good healthy reef.
We started trolling and changed our lure to a Rapala; we hoped to have better luck than the first day. Thenatural landscape was gorgeous, formed by a lot of different rock shapes, seamounts, and small little islands. We could also see how dense and untouched some parts of the forest were.
The water was rough and the current quite strong at our first spot.  It was a perfect habitat for predator fish.We didn’t see any big fish except for small trevally. We saw a green turtle but it became frightened and ran away, so I could only follow it at a distance. 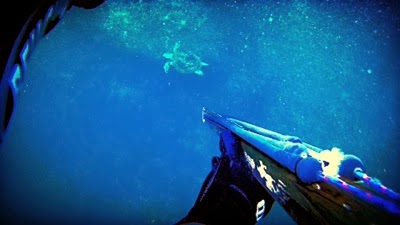 The second spot was on the front entrance of a big bay; the water visibility was rather low. I was greeted by a school of big pompano; it was too late to dive again because I just came out a minute ago. However, I could not resist the temptation and dived again and managed to take a shot on the last pompano of the group but the target was too far and I missed it completely; not a good feeling for the first shot. The others guys called it quit to save some energy for the shark island. 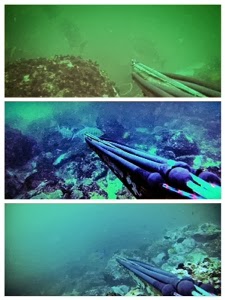 The Shark Island was nice and reminded us of the southern part of Bali. The dive was hard because itrequired the maximum depth; needless to say, diving into deep-sea consumes a lot of energy! I saw a lot of trevally medium size, Maori sea-perch, aka scribbled snapper, but the dive was too quick to get a goodshot. Then there was a big rock 13 to 15 meter deep and I saw a group of giant pompano and scribbled snapper. I waited for the pompano to come closer, but it kept its distance; I approached it then very slowly,inch by inch, but the pompano slowly backed away and I was left with the scribbled snapper who also kept its distance. I wished I was using the Cressi Geronimo gun that has more power and accuracy. I did a few more dives but no sign of the monster Pompano. By the time, I decided to swim to the seamount next to the island but I was really exhausted and, on top of it, I consumed a fair amount of sea water due to the choppy water. So I called it quit. The seamount was pounding with waves and white water wash; I was not in themood for extra sea water on my belly!
The captain was a bit disappointed because he used to catch a lot of fish back in the old days. He was telling us stories of filling up his fish hold with snapper and pelagic fish. So he took us to a more protected area with less wind; the reef was intact and pristine; it was the only part where the reef was alive, the coral was colorful and we could not see a single dead coral. The water visibility was excellent; I didn’t see any good fish to shot at except for a good size octopus; so I brought octopus back for dinner.
On our way back, we tried our luck right in front of the bay where our camp site was located; Fabio reel started screaming and after our previous discouraging experience, our spirit was up again; everyone was cheering Fabio; it wasn’t a long fight and Fabio was rewarded with a good size Spanish mackerel. We could finally have some sashimi!!! We headed back to our camp, cut the mackerel and had fresh sashimi for appetizer. We made our neighbor fisherman try raw fish for the first time and they were surprised how tasty the fish was. The fish sashimi was excellent; the meat was transparent and made all of us happy. While wewere busy eating and at the same time cutting thin slice of Spanish mackerel, Arvid was making a jumbo portion of pesto pasta, with grilled chicken and abundant amount of parmesan cheese. Everyone had twoservings of the pasta and were full! 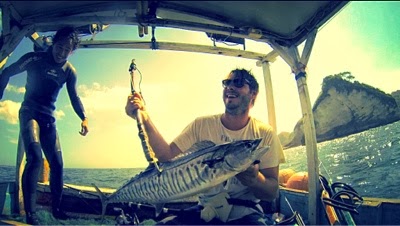 We decided then to reward ourselves to the “spa facility” located in front of the waterfall. None of us havetaken a shower during the entire stay in the camp; so it was time for a wash-up! We walked for about 10 minute to the waterfall. There was a small pond beneath the waterfall big enough to fit 20 people; the water was clean, tasted good and had a perfect temperature. It was a big relief for all of us to get clean with fresh water and the experience was delightful! 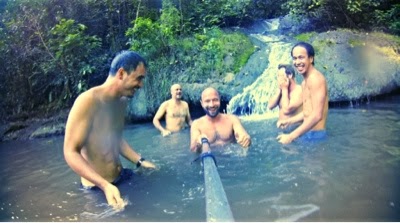 After our outdoor spa, we all felt fresh but still exhausted, so we all rewarded ourselves with a nice cold beer. We decided to avoid drinking beer in excesses during this trip; we usually planned 24 can per person per day but only 3 can per person per day this time. To our surprise but not to our dismay, we learned that beer was in great demand for fishermen at Ramadan time. I asked them whether drinking beer duringRamadan does not contradict their religious believes?  He answered that this was not a problem for them because they have to undergo a hard life as fishermen. So every cold beer was very valuable during this trip, we consumed them slowly, and made sure to also hide them so that fishermen would not be too often tempted for a cold beer!
Arvid and Wolou decided to dive nearby, Rob was sleeping like a baby, so only Fabio and I remained int the camp. Fabio already started with his afternoon cocktail and we decided to have a sunset trolling around the bay; there might still be some mackerel or cobia. The water condition was dirty, murky, strong wind and the condition was horrible for any diving or fishing. We were pounded with big swell in front of the bay. So we decided to call it a day with no result; Arvid at the same was coming out of the water with alsono result.
When we arrived at the camp we had no more fresh water. Wolou, our hero of the day, trekked to the waterspring to collect seven liter of water that we boiled it first. Boiled water most of the times presents somerisk but Wolou made sure to collect running water to eliminate some of the risk. This was an useful lesson for us; we had to in the future add purifying powder for water in our checklist!
Our dinner menu was Spanish mackerel steak, tomato chili and basil, fried rice, spicy octopus, and grilledvegetable. We all enjoyed our last two cold beers. I tried not to drink the water from the waterfall, so I was drinking soda water, mango juice and beer. To celebrate our last night we lid up a massive firework. The sound echoed through the bay, the color and light was amazing. Arvid, Wolou and Rob were having time lap competition. Fabio and I enjoyed the ambience of the forest, river, sea and the bond of fire. It was aperfect farewell party. Nature was very generous to us during our entire stay; it offered us so much beautythat words cannot describe! And what has also been remarkable is the joy of companionship and realize that we had in common interests and even tastes! We could not ask for more to what we experienced during our stay in this magnificent place. We wish to plead those who care about our environment and future generations, government and non-government organizations, to work on ways and means to educate people to keep the place clean, stop dynamite fishing, and maintain the natural peacefulness of the bay. Hopefullythe habitat will heal itself and go back to its pristine state of the past so that our children can enjoy a safe, clean and sustainable environment. A Dutch biologist did some research on the 80s and it is shame that his recommendations on managing the national park were not enforced. He pointed out many practical ideas to maintain and ensure the sustainability of the park natural environment. 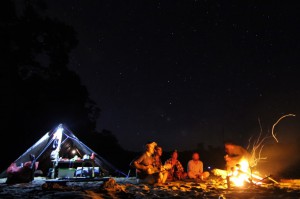 We all wish to thank our captain Marjuki and his crew; their kindness and assistant were more than we asked for; the family of the captain for their hospitality, they welcomed us to their house, let us shower and rest. We also wish to thank the Pancer people whose smile brightened our days throughout our stay. To bapak Subiyanto who has helped us to obtain a boat, which was so important for reaching the different sea locations; and to all the fishermen who have entertained us with their tales and stories about the Meru BetiriPark. And last but not the least, to my companions for their friendship, understanding and support that meant so much for making our visit to the park an enjoyable and rewarding experience.

All Picture are taken by Arvid Nicholas , Velere Terrier and  Robert Koster