Fish with many names 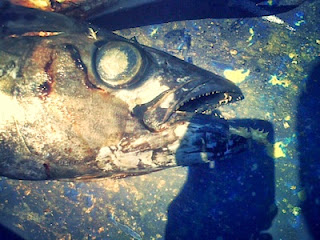 I am a bit worried and disgusted by the popularity of the usage of Escalor aka Butterfish, Oilfish, white tuna , Ikan Setan and many other names. Why the local fisherman call it “Ikan Setan” is because of the Keriorrhoea affect it has on the person who consumes the fish.Escolar’s diet contains food high in wax esters. Wax esters that are really difficult for Escolar to digest. As a result, these esters build up in the fish. Keriorrhoea occurs because the wax esters in the flesh of the fish pool up in your intestine. Why fisherman of Indonesia call Escolar “Ikan Setan”, translation “devil fish”… Now Imagine your fishing for months on a long line vessel and having diarrhea. It is one of the worst sicknesses you can have onboard. You get dehydrated, weak and stuck on a boat thats rocking side to side.

So fisherman avoid this fish but why are people eating this fish in fine dining restaurants? Well first of all i am not sure if the chef knows that fish is Escalor because the seller calls it butterfish, white tuna, and cod.

I guess if you only have less then 100 gram is save to eat it, but if you have weak stomach I suggest to  avoid this fish.

Another fact that consumer should know. I will give you short brief history of Escolar in Indonesia fishery. 20 years ago Longline company only catch 100kg up Bigeye Tuna, Yellowfin and Southern Bluefin. Baycatch such as sunfish, Escolar, shark, Albacore and Swordfish and release back. Few years after the number of tuna catch drop. So they add Swordfish, Albcore some pelagic fish and still throw away Escolar. Then the last 10-6 year they start bringing back Escolar and sold under various different name. first it was sold for under 50 cent a kg and until this day 3-5 dollar per kg. The Escolar are caught in deep water, only the longline vessel catch it. They store Escolar along with all the other bycatch which they call “Ikan Campur”. The bycatch stayed onboard in the vessel until they return to dock which usually vary between  3-6 month. The fish are not treated properly and majority of the vessel don’t have a proper freezer because the are using fish hold with minus 4 degree water to store all the fresh tuna and swordfish.

Is it worth it? no because the fish is not fresh, laxative, and it can ruin your date with a really hot girl.  I suggest stick to snapper, grouper and barramundi. They are fresh and no need to worry about going to the toilet.

tips:
1. Butterfish in all japanese restaurant in Indonesia is Escolar think before you eat that white yummy Sashimi
2. Butterfish in some of the 5 star hotel is not some fish from America, is Escolar that is 3 month old frozen.
3. If your planning to lose weight eat Escolar for a week.

From Bali over Lombok, to Sumbawa! Freediving and Spearfishing