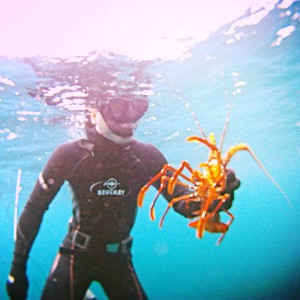 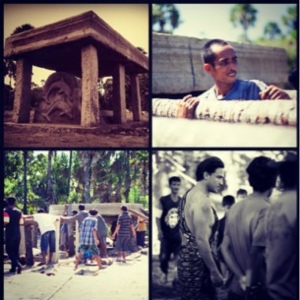 Day 3
Everyone woke up with a big hangover the next day. I was still burping alcohol after breakfast. But the plan was to film spearfishing for Hamish’s “Adventure TV Show” for one of the local channel in Indonesia. I was struggling; none of us shot any fish. But the hangover dive was compensated by a seeing a big turtle and dugong, accompanied by a school of small golden trevally and good size cobia. My energy level was depleting very fast due to hangover and I was also scared to shot anything including the easy target of a cobia behind the dugong. I was afraid that I would miss it and hit the dugong. I decided not to shot anything and I went back with huge regret.
I felt better by noon and decided to try a different spot. We were told that there are rainbow runners, milkfish and trevally. The reef was the ideal habitat for good snappers and pelagic fishes. I was teased by a small scribbled snapper; I missed all the shots. Then I saw another one but 10 times its size. I waited patiently but it didn’t come closed enough. I finished the day with 2 rabbit fishes and one silver snapper not sure of its name. We ended the day by going to bed very early because we were tired.
Day 4
We had given up on waiting for a boat to take us to a better and more promising spots. So we decided to try our last spot one more time. I entered the reef from a small channel. I was greeted by a school of unicorn fish, then African Pompano and a two meters black tip shark. I felt like a kids in candy store, and my heart was ready to pump out my chest with excitement. I stop for 2 minute to control my heart beat then full charge through the channel. At first all the fish was spooked by my entrance; I tried to creep through the side of the channel but the fish was a little bit edgy. So I decided to ignore the spot and come back later. It paid off because a school of giant African pompano headed straight towards me and of course my first target was the first one, which usually is the biggest one; unfortunately they were too fast so I went for the more promising shot. I took the shot and the buoy start running, I grabbed the rope and followed it. Then I tried to pull it slowly and saw the shaft didn’t go through; clearly I needed to be extra gentle. I slowly pulled it up and it then started swimming so hard heading towards a big rock; my worst nightmare was about to start. I swam down and tried to get it off the rock, then not long after it tangled itself to the next wrong. I literally dive 5 times with 10-20 sec surface time. It the end I caught the fish and grabbed it by the tail and brought it up. It was a nice 8 kg African Pompano, not the biggest of the group but good enough for dinner.
I decided then to explore a new area and it paid off; the terrain was amazing. Not long after that, we saw scribbled snappers, mangrove jacks; cubera snappers and this trigged our enthusiasm! Shot after shot and the catch size was getting bigger and bigger until the point when we decided it was enough fish to last 3 days! The average size of the snapper was 3.5 kg, which amounted to a total of 45 kg of fish! We ended up a day by having a big bonfire and grilled the fish by the beach.
We headed back to Bali the next day. We’d wished we could have hired a boat and hunted the big pelagic fish.  Never mind, the size of the catch of the previous days made up for our failure to catch the pelagic fish. All in all our experience in East Sumba from every point of view was unique and rewarding. Our plans are now to go back to East Sumba as soon as we can. Although on a sad occasion of the funeral of Hamish’s father, our trip this time proved to first be of comfort to Hamish and his family and then an opportunity to appreciate their warm hospitality, opportunity to witness such a sensitive funeral service, and finally admire the local people’s respect for the integrity of their ocean and environment. 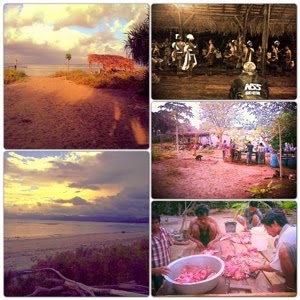 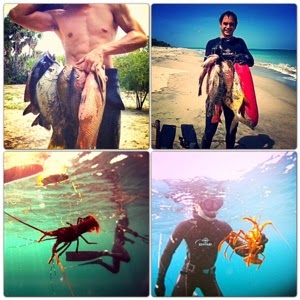 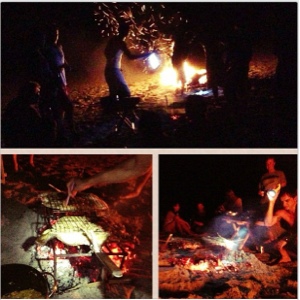 A Dream trip to Eastern Indonesia