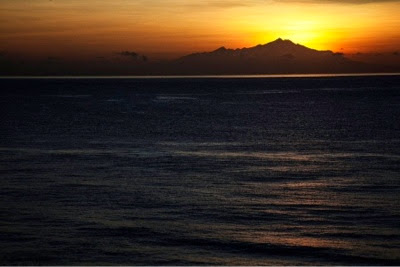 Since my first trip to Nusa Penida, I know what people really mean when they talk about crystal clear water. As a former diver I’ve already seen clear water in the Red Sea, on the West Coast of Australia, in the Andaman Sea and even on one or two occasions in the South of Bali. But seeing close to 50 meters under water was something I haven’t been privileged to experience so far. This was reason enough to really look forward to my second trip to this little, beautiful island off the East Coast of Bali.

Already before I jumped into the water, I noticed that something was different this time. At my favourite spot around the island, a lot of things were floating on the water. Some wood, some leaves and a lot of plastic trash. It was strange to see the Canang Cari slowly drifting from the boat to the massive garbage carpet as soon as it was given to the sea. So this offering for the gods given by my two local friends ahead of every fishing day was for once not the beautiful and impressive tradition I’ve learnt to appreciate so much. The trash just didn’t fit to this underwater paradise full of  beautiful, healthy corals, turtles and all kinds of fish. I’d rather wanted to see some sharks instead. But it seems that we humans see trash as a replacement for everything we take out of the sea… 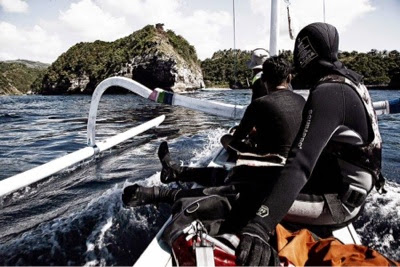 Also not impressive was the water below the surface. A visibility of around 15 meters might be highly welcome in South Bali, but for sure not at this underwater heaven. The reason for the poor visibility was not only the milky water, but also some more trash. Huge amounts of garbage were floating in the current. My eyes didn’t want to believe it at first, but there was no doubt that this was the very spot where the term “crystal clear water” was explained to me a little while ago.
I didn’t have a lot of time to be disappointed though. Because soon I noticed that between the pieces of plastic were also some fish. So I dived down to take a closer look and soon met a big group of Rainbowrunners. I tried to get myself into a good position, but wasn’t able to get close enough to a fish. On my second dive I was more lucky. I didn’t even have to dive deep to meet the Rainbowrunners, because one approached me from behind and swam right into my reach.
I had no time to enjoy the catch of this beautiful fish, because luck decided to be on my side this day. Right after my first catch I spotted the silhouette of a fish right in front of me, but quite deep down. The fish didn’t look that big, but I was sure it was not one of the Unicorn or Surgeon fish roaming around this spot. So I took a deep breath and dived slowly straight down. When I was at the same depth as the fish, I noticed two things: I was right about the species, but wrong about its size. Just 6 or 7 meters away was a big Giant Trevally swimming around.
My first reaction was the same as always: Excitement. The moment I notice a big fish around, instinct takes over. My heartbeat doubles in a matter of seconds and my bloodstream is taken over by adrenaline. All the skills I’ve acquired over the past two years are gone. My inner voice screams like a maniac and my ego already sings a song about the great fisherman. 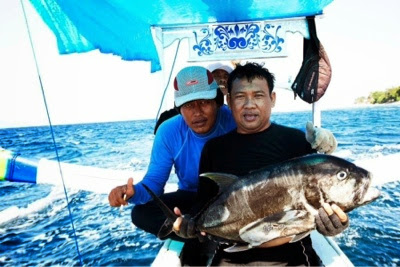 I know this feeling pretty good, because I’ve already had the luck to see a few big fish before. But for the first time I could calm down my heart and successfully control my instinct to rush towards the fish. Gently kicking my fins I managed to slowly approach the fish without scaring it off. The moment I shot, all the suppressed excitement came back up and put myself in a fight I’ll hardly ever forget. I gave my everything to land this fish. And my efforts paid off: It was finally time to take home my first really big fish…
Actually this is not even true, because the fish of almost 10 kilos never left the island. I had the opportunity to share it with my friends, their families and their friends. Close to 20 people were around when we barbecued the fish over an open fire in the evening and enjoyed it with delicious Sambal Mentah. And because I know that nothing of the fish was wasted and that the fish was really appreciated, I’m very happy that I still have to bring my first big fish home… 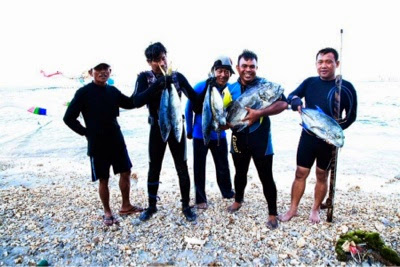 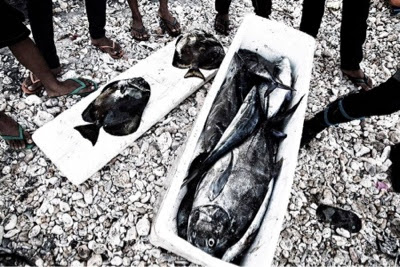 Thank you guys for your time and sampai jumpa lagi
Text and photo by: 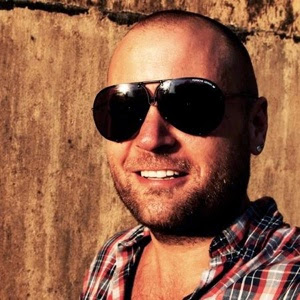